Prague. Is it all 'THEY' say it is? Plus random travel tips!

My quick trip to Europe.

This past October I was able to join Mark in Frankfurt, Germany after he went over for a business meeting for a few days. I know a few days? Yes, I was only in Europe for four (4) days, but what I have come to realize - if someone asks if you want to go to Europe, no matter what the duration, the answer should always be YES!

Anyway, if you have ever read any of my travel blogs before you know we are not the go to one place and hang out there for the entire time kinda people. Mark and I try to see and do as much as possible in whatever time we have pretty much wherever we go. This was no exception. I landed in Frankfort at early in the morning German time I believe it was about 7:15 AM. Mark met me at the airport and we grabbed a rental car (this time we got a Ford Focus wagon a huge step up from the Smart Car we had on our last European adventure) we stopped back at the hotel where he had stayed had some breakfast and got on our way.
I tried my best to stay awake, but with a six hour time change I was no match for sleep (trying to sleep while in a car on the autobahn is interesting).

We drove the 5.5 hours to Prague. This was our first time to the Czech Republic. I had heard stories from people over the years that had studied abroad or traveled to Prague and it only got out of this world reviews which always makes me a little hesitant. Will it live up to the hype? Has it completely changed since these people were here 20+ years ago? How is Czech beer?

Now I am realizing my original thoughts on this post are not going to work. This is more than one post. Way more. So we will start in Prague and work our way to our crazy side adventure en route to Berlin.

Prague is divided into districts and we stayed in Old Town.
Now as I sit here to write this I think this may be more than one post too (I am sure it is more than one)...even though we only stayed in Prague for a few days.

We talked with the hotel front desk awesome Prague ambassador

and asked a few questions like where it go to try Czech beer and all of the other important questions.

Somehow I was anointed the navigator (I think Mark was punishing me for something) and we wandered out in the lovely Prague evening. We walked from our hotel heading to the Prague Beer Museum. I am not sure why it is called a museum because there was no beer behind glass or history of Czech beers. Maybe something was lost in the translation. 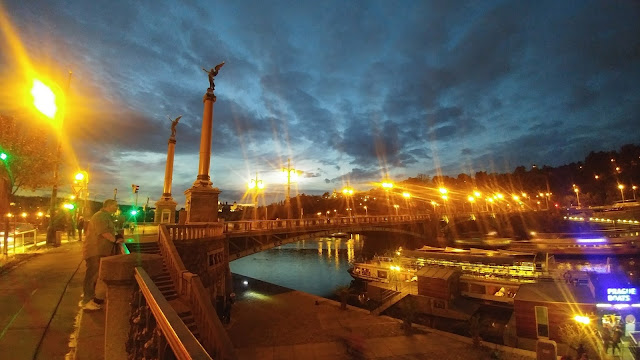 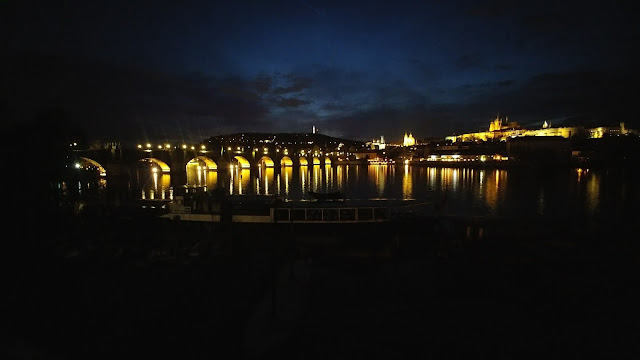 On our way to the Beer Museum we stopped at the iconic 14th century Charles Bridge.
The Charles Bridge is a pedestrian bridge that crosses the Vltava River and I believe it is crazy busy no matter what time of day you go... 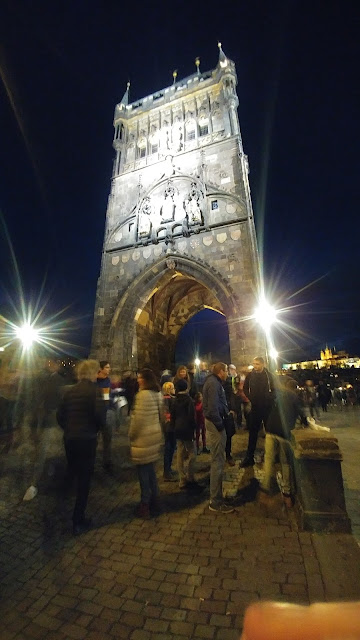 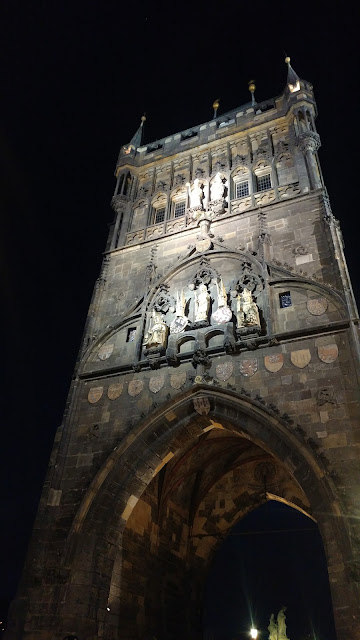 One of my favorite parts of travelling through Europe is how our American version of old is nothing compared to European versions of old. This bridge has been around since the 1300s and it is still completely functional and stunningly beautiful.

Across form the bridge is the Church of Saint Salvator. This Catholic Church was built by the Jesuits between 1578-1601. It is one of the best examples of early Baroque Architecture in the city. 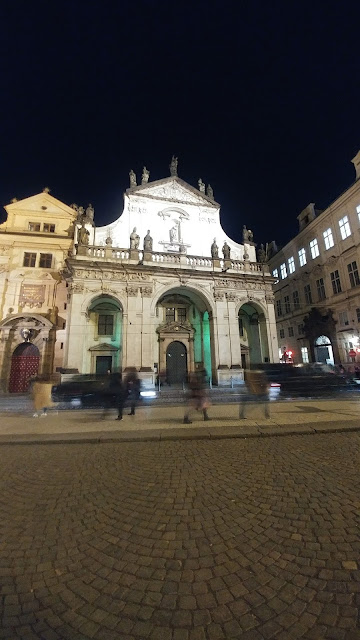 Onward to beer! My only exposure to Czech beer prior to our visit was Pilsen, which conveniently was first brewed in the city of Pilsen in the Czech Republic and is where we get Pilsners...the more you know. Anyway, the Beer Museum was only a few blocks away and we were ready to see what these brews were all about. 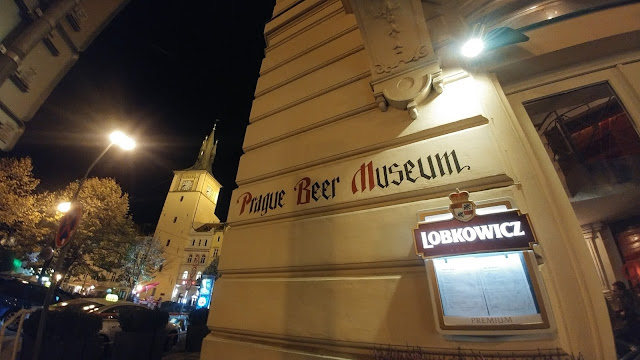 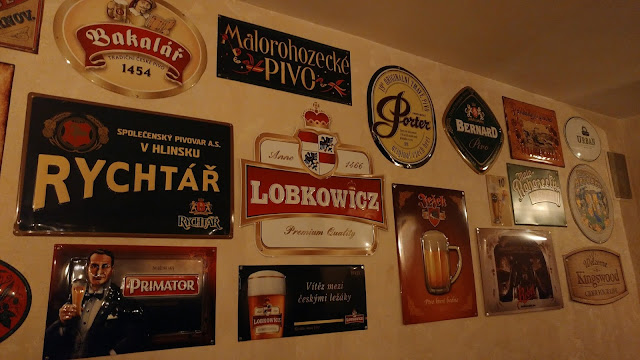 I had no idea just how many Czech beers there are and I love beer! 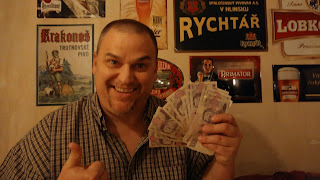 Travel tip #958 - Instead of going to a currency exchange just withdraw money from whatever country you are in from an ATM! Just be sure to let your bank know you are traveling so they don't put a hold on your cards! Also good to at least have an idea of the exchange rate...smarty pants here withdrew a wee bit more than he intended. Please note flight #7...
You get to try ALL 30 BEERS AT ONCE!!!! I wanted to sooooo bad, but decided I needed to be able to walk back to the hotel and this would not be wise. The cost of a flight of 30 beers? About $45 USD depending on the exchange rate at the time of purchase. I WILL try this next time. 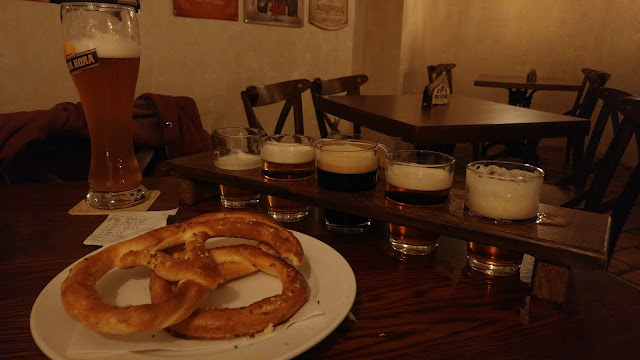 Sorry for the dark pictures...but I am not sorry for my dark beers.
Mark had a wheat beer I am sure (he does this to ensure I will not drink his beer because I abhor wheat beer). Every one of my beers was more delicious than the one prior. 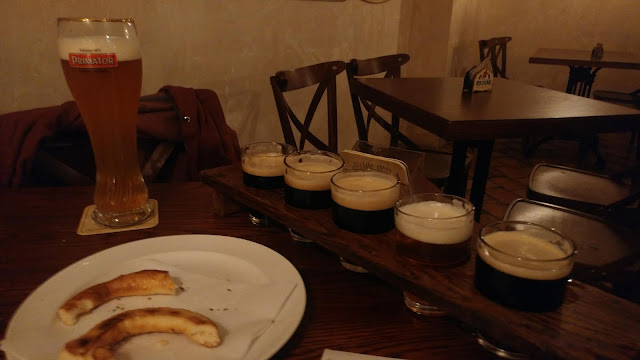 Yep, I did two flights because I could not get enough of these amazing beers. Honestly these were some of the best beers I have ever had. EVAHHHH! 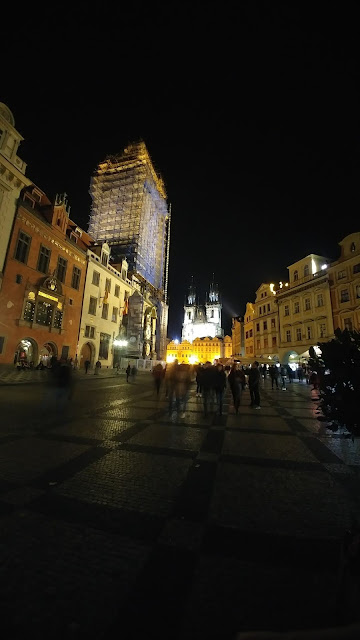 After beer we navigated our way to the Old Town Square where the gorgeous Astronomical Clock is located.
Ummmm WOW!
The oldest part of this clock dates back to around 1410.
1410!!! 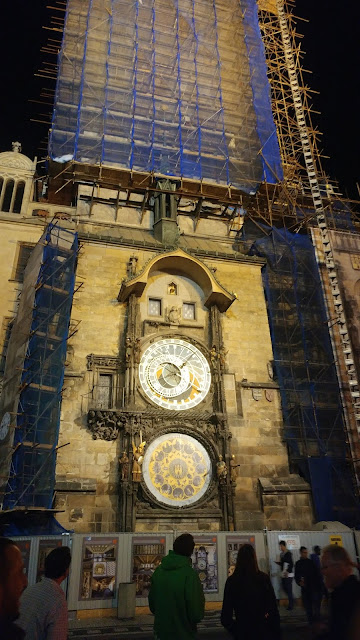 As you can see the tower is under renovation and should be complete by October 2018 to celebrate the 100th anniversary of Czechoslovakia.
After Old Town Square there was another local beer... 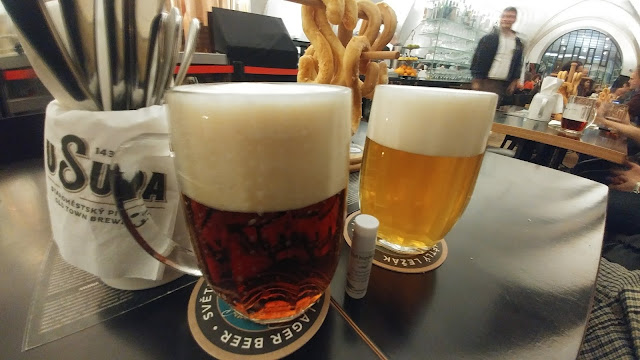 Then back to the hotel and the more common Pilsner and off to bed... 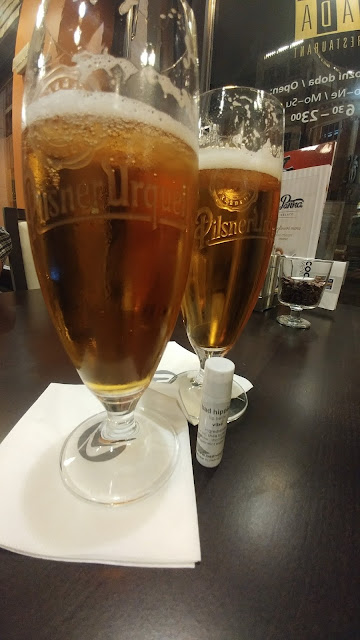 So much walking and so much delicious beer!
Now I am realizing this needs to be several posts so I can touch on how we ended up walking about 2 million steps a day and saw so many amazing things in just a few days.

To answer my own question I posed in the title of this post: Is it all 'they' say it is? My simple answer is yes!